In this episode we take a first look at structured logging from an AspNet Core application using Serilog and Seq.

Configuring the web app to leverage serilog only requires 3 simple steps. First make sure to get the nuget packages by adding these lines to your packages.json.

In the constructor of your Startup.cs file, configure the logger to log to both the Seq endpoint and to a rolling file, or that’s at least what I did.

This assumes that you’ve installed the Seq MSI on your local machine, you can grab it from here. Finally, add serilog to the logger factory in the configure method.

That’s it, browse http://localhost:5341 and you should see the following: 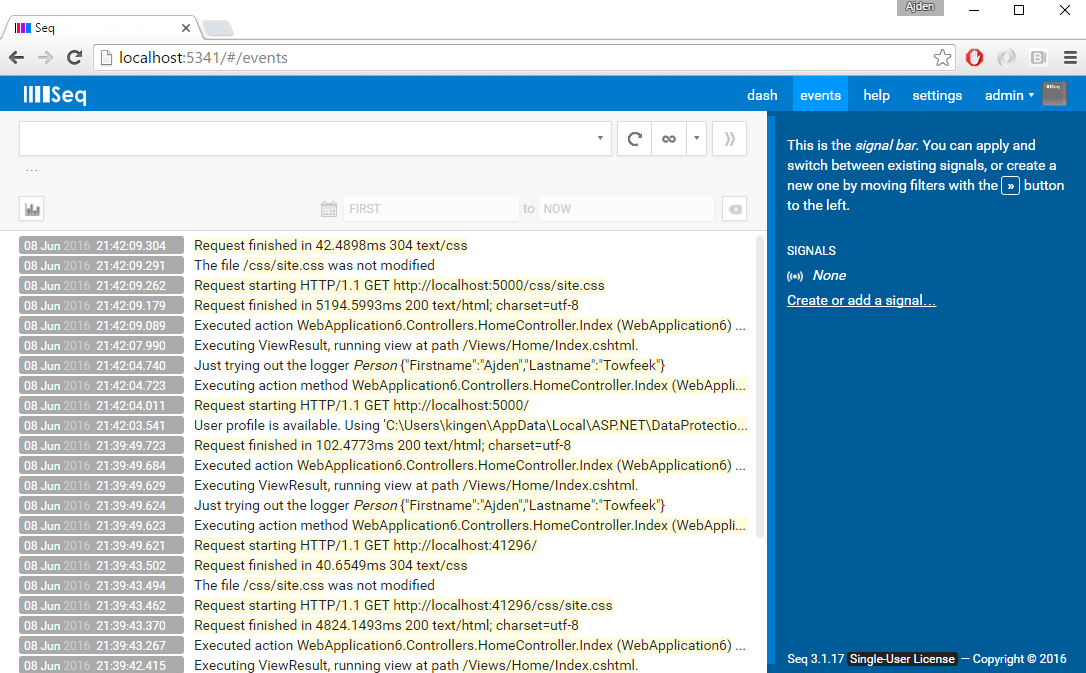 To log entire objects that will be queryable, simple pass an @-sign in front of the tag name that you want to create. For instance, to log a person object and create a tag accordingly from the HomeController we do the following.

It’s really powerful to log information with rich, structured and queryable log data but there are also some downsides for the moment with using Seq that I’d like to point out.

Having that said, I still think the idea of structured logging is very interesting and it provides an extra dimension of information when fixing/reproducing bugs. I just won’t be using Seq in production just yet.

In this weeks screencast we fully replace bootstrap with material components for angular 2. Material2 just announced their alpha 2 release, adding a bunch of components, perfect timing for live coding screencast, code at https://github.com/ajtowf/ng2_play. The ng2play repo has also been updated to the latest angular2 version which at the time of writing is beta 15, see the changelog for details.

During the coding session we integrate the following components into our app:

Make sure to check out the screencast below, enjoy!

There isn’t any official documentation for material2 yet, but there is a demo app in their github repo, here are the steps to get it up and running on your local dev machine:

After the changes rebuild, the browser currently needs to be manually refreshed. Now you can visit the prompted URL in your browser to explore the demo app.

To learn more about material deisgn and components for angular, make sure to check out my pluralsight course Angular Material Fundamentals.

Until next time, have a nice day folks and keep on coding!

A recursive function is simply a function that repeatedly calls itself and the trick is to realize when to stop calling ourselves to avoid infinite loops that result in stack overflows.

If the interviewers ask you to write down an algoritm that gives you the n:th fibonacci number, calculate faculty or traverse a binary tree they probably want you to provide both an iterative and recursive solution. We don’t address fibonacci in the screencast, but the formula for the n:th number is simply the sum of the previous two, i.e.

Is this a good interview question?

Here’s the recursive methods I developed during the screencast to calculate faculty and to sum the value of all the nodes in a binary tree:

As you can see the answers are usually very simple but it’s not unusual to see candidates try to make things more complicated than they need to be. Just keep it simple.

Interviewers tend to ask these kind of questions even if functional programming is a very small part of the day to day work. It’s always good to be prepared by training on some simple problems similar to the ones covered here. After one or two exercises you’ll get the hang of it and it won’t be a problem if they throw these kind of questions at you during the interview.

And as always, until next time, have a nice day!

This is a first attempt on a series with focus on solving commonly asked programmer interview questions, in this first episode we’ll do prime factorization.

And yes, I’ve been made aware of that 21 is not a prime, not easy to code and talk at the same time. 🙂

What the interviewers are looking for

It’s not all about the final solution, the interviewers are interested in how you break down larger problems into smaller more comprehensible ones. How you go about solving problems with logical thinking. If the interviewers are any good they’ll try to make you feel comfortable and develop a solution together if you get stuck, the idea is not to grill someone at the whiteboard.

There’s three partials problems to solve, or four perhaps if we count in to realize that we’re done.

Sometimes the candidate will try to give us a recursive solution because they think that’s what we want to see, it’s not, going down that path usually only complicates things. If the interviewers are fishing for a recursive solution, they’ll probably ask something like:

Do X without using a loop

where X could be to reverse a string for instance. It’s always a good idea to write down test cases and test the solution by hand at the whiteboard.

Bare in mind, it’s been quite some time since I solved these kind of puzzles, don’t be harsh. 🙂

Is this a good interview question?

In my experience it helps to seed out some bad programmers. It can most certainly seed out some candidates with potential as well, but we reasoned that it’s simply worth it rather than hiring a really bad programmer. In the end it’s up to the interviewers to steer and adapt the audition to fully explore the candidates skill set, everyone doesn’t perform well under stress and it’s important to be agile during the interview process.

I don’t think that these kind of tests alone is enough to make a decision weather a candidate should get a job as a programmer or not. We usually combined an algorithmic problem with a business/architectural problem and tried to solve that as well, after all we were in the business of developing enterprise applications and not programming puzzles.

Feel free to provide your own solution and suggest optimizations. You don’t have to be a programmer to solve these kind of puzzles, you can do it with a pen and paper. We did this on the whiteboard, so the code didn’t even need to compile. It’s fun!

And as always, until next time, have a nice day!

In this weeks screencast we take a first look at the material components for angular2 that just released their first alpaha, code at https://github.com/ajtowf/ng2_play. We’ll integrate the button and checkbox component into our ng2play repo, the idea is to fully replace bootstrap down the road.

There will be breaking changes between alpha releases, first release of angular2-material includes the following components:

To learn more about material deisgn and components for angular, make sure to check out my pluralsight course Angular Material Fundamentals.

Until next time, have a nice day folks!

New screencast on Angular 2 beta 9, covering Lifecycle Hooks, get the code at https://github.com/ajtowf/ng2_play.

Directive and component instances have a lifecycle as Angular creates, updates, and destroys them. Here’s the complete lifecycle hook interface inventory, all of them available in the angular2/core library and called in the provided order.

To learn more about lifecycle hooks, check out the official documentation here.

Until next time, have a nice day folks!

If you’re getting “The current TransactionScope is already complete” from service calls that don’t even consume transactions, you’ll probably want to read/see this.

The code can be found on github, https://github.com/ajtowf/dist_transactions_lab, one change I did since the recording is that we don’t create the nhibernate factory with each call, we now use a singleton SessionManager instead. Also we’re adding the convention to the factory to never load lazy so that our Item entity don’t need to have virtual properties, which makes it easier to switch between OR-mapper implementations.

In a fairly complex distributed enterprise system we were getting some strange The current TransactionScope is already complete errors. We used transactions frequently but we saw this on calls that wasn’t even supposed to run within an transaction.

After trying almost everything we got a hint from a nhibernate analyzer product that we shouldn’t consume a nhibernate session from multiple threads since it’s not thread safe.

If you use await, that’s exactly what happens. Turns out entity framework has the same problem.

The following code in your service will leak connections if the awaited method or service call uses a database connection with EntityFramework or NHibernate.

Why Tasks in the Service Contract at all?

The lone reason for our service contracts being task based is that we use the same interface to implement our client-side proxies, which is neat, but the service doesn’t need use await because of that. This will work for instance:

Oh, you don’t want to return a Task if you’re not doing anything async? Do this then:

What about the warning? Turn it off with #pragma.

You’ll probably want to wrap the entire service class with that pragma disable.

The main take away here is to simply not use async/await in your service code if you’re awaiting methods or service calls that will use database connections. The following refactoring solves the problem:

As always, until next time, have a nice day!

Part I: Signup, Login and Logout

See my screencast explaining problem instead:

When flowing a transaction from a client to a service Transaction.Current becomes null after awaiting a service to service call.

Unless of course you create a new TransactionScope in your service method as follows:

It doesn’t even have to be a service to service call, an await to a local async method also nulls Transaction.Current. To clearify with an example

Why TransactionScopeAsyncFlowOption isn’t enabled by default I don’t know, but I don’t like to repeat myself so I figured I’d always create an inner transactionscope with that option using a custom behavior.

I created a Message Inspector, implementing IDispatchMessageInspector and attached it as a service behavior, code executes and everyting no problem there, but it doesn’t have the same effect as declaring the transactionscope in the service method.

by looking at the identifiers when debugging I can see that it in fact is the same transaction in the message inspector as in the service but after the first call, i.e.

Transaction.Current becomes null. Same thing if not getting the current transaction from OperationContext.Current in the message inspector as well so it’s unlikely that is the problem.

Is it possible to create a TransactionScope in a Custom WCF Service Behavior?

with the following service contract it’s obvious that we get an exception on the second service call if transaction.current became null inbetween

Got a link to a book posing the exact same question on my stackoverflow question. The conclusion is basically that it can’t be done in a clean way. Quoting the book:

And then a far from ideal / insane solution is proposed.

It seems like the only way to make this work is to create an inner transaction, if you have a better solution feel free to comment or contact me or why not answer my stackoverflow question http://stackoverflow.com/questions/34767978.

Started a new series on efficiency in visual studio with resharper, here’s the first part that’s on navigating the code. What’s your favorite navigation shortcut?

Hope you enjoy the video and make sure to subscribe if you do, cheers!